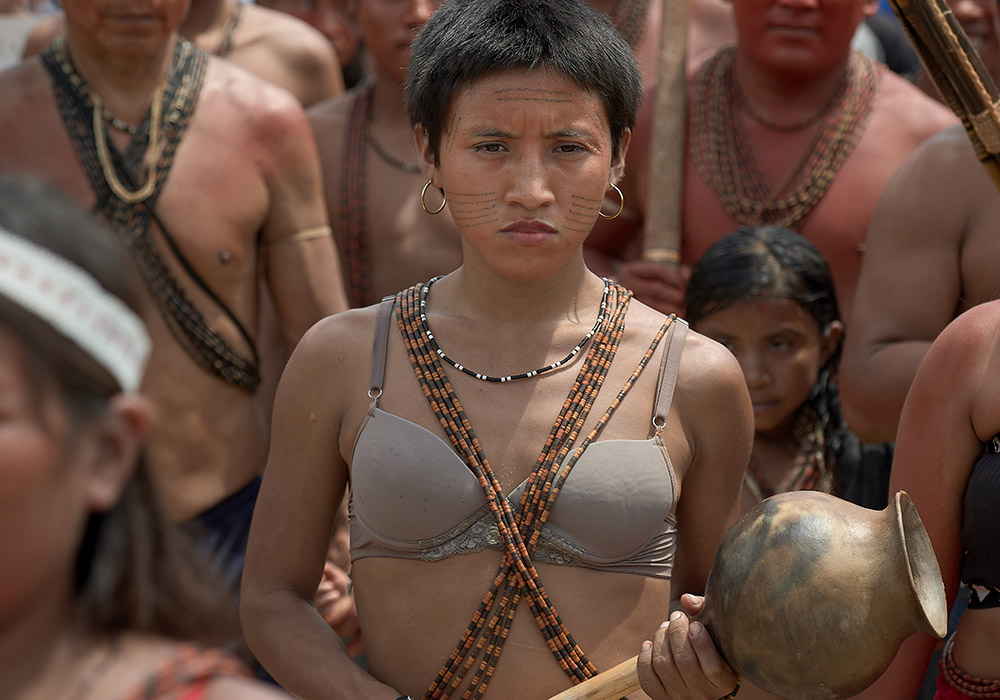 Indigenous people march through the streets of Atalaia do Norte in Brazil's Amazon region, protesting a central government plan to turn control of health care over to municipalities, in effect destroying a federal program of indigenous health care. (CNS/Paul Jeffrey)

Perhaps no one was less surprised last week than I was when Pope Francis' Querida Amazonia showed no openness to a female diaconate, and instead was laden with the language of gender complementarity in its discussion of women.

For years I have used this column to document Francis' beliefs about women and to plead with readers to be honest about how his thinking would seriously limit the possibilities of real change for women in the church. Beginning with his description of feminism as "chauvinism with skirts" early in his papacy in 2013 through his 2019 dithering on women deacons, I wrote on this topic at least 20 times in the last seven years.

I did this not to sound like a broken record — though I most certainly did — but rather to spare myself and my fellow churchwomen from the heartbreak that I knew would come. Unless Francis moved beyond the theology of complementarity, women would never receive the justice they deserve from their church, an institution that they serve, sacrifice for, and very often sustain singlehandedly. The pope, unfortunately, never showed any signs of budging.

What did surprise me, however, was Francis' refusal to address the ordination of married men in areas like the Amazon region where Catholics sometimes go without the Eucharist for more than a year. For years I had predicted that the pope's reverence for fatherhood and his stated desire to discourage gay men from the priesthood would have made this a forgone conclusion.

I can't help but think that the pope's failure to respond to the synod fathers’ request to ordain married men was the reason that Querida Amazonia made headlines, even in the secular media.

How much disappointment and outrage would have erupted if the pope had moved forward with ordaining married men, but his retrograde words about women remained the same? After seven years of watching this papacy closely, I feel certain that the issue of women would have been completely lost in the celebration that would have broken out in this triumph for married men, and Francis would have been hailed as a progressive hero.

But instead, all laypeople remain out in the cold. And Francis, it seems, is as frustrated as we are. The day after Querida Amazonia was released, Catholic News Service reported that Francis told a group of U.S. bishops that he was dismayed at being accused of not showing courage. The person to blame, he seems to suggest, is the Holy Spirit.

But I was at the Synod of Bishops for the Amazon, and it seemed to me and many others who were listening that the Holy Spirit was speaking loudly and clearly, particularly on the issue of empowering women.

In every press conference I attended, I was stunned to hear not only women, but priests and even some bishops, speak boldly about the need to somehow lift up the women and honor their dignity by formalizing and expanding their ministries.

I will never forget the words of Sr. Roselei Bertoldo, a Missionary Sister of the Immaculate Heart of Mary:

"We are the church, and we make the church," she said. "We ask to participate more efficiently at the decision-making level. We are starting this journey. We won't be quiet; we want space, and we are starting to build that space."

I was also at the 2018 Synod of Bishops on young people, the faith and vocational discernment, where in their final document the synod fathers stated that it is a "duty of justice" to address "women's presence in ecclesial bodies at all levels, including in roles of responsibility, and of women's participation in ecclesial decision-making processes, while respecting the role of ordained ministry."

So the claim, like that of Mauricio López Oropeza, that the inclusion of married men and women in sacramental ministry are somehow ideological concerns of Western, privileged Catholics simply do not ring true. Clergy and laypeople alike from all over the Amazon were calling for it, and these issues have been raised in the final documents of the last two synods. If this is not a sign from the Holy Spirit, I don't know what is.

So perhaps the obstacle isn't the Holy Spirit, but rather the blind spot that Francis has about women, a defect that is so jarring given the pope's otherwise remarkable sacramental view of the world.

Many progressives have come to love Francis because he understands and expresses the deep Catholic belief that God is truly everywhere. His sacramental imagination shines through in Querida Amazonia. His quotes from "Laudato Si', on Care for our Common Home" remind us that his encyclical on the environment is a masterpiece of Catholic imagination, and his clear preference for the poor demonstrates that he truly sees the crucified Christ in the faces of the poor and hears a suffering God in the cries of the afflicted.

In his sacramental understanding of the earth and of the poor, Francis exhibits what is true and beautiful and life-giving about the Catholic tradition. And that is what makes his words about women so acutely painful. His failure to see God fully alive and incarnated through the work and ministry of women feels like a betrayal by a man who otherwise sees sacrament everywhere.

In the wake of Querida Amazonia, we must ask, why does Pope Francis' sacramental imagination stop short of women?

The question is an important one because it has a profound impact on how we will be able to achieve justice for women, particularly in places like the Amazon.

During one of the press conferences at the Amazon synod, Judite da Rocha, Brazil's national coordinator for the Victims of HydroElectric Dams, made the connection between the sexist idea that women are not equal and the treatment of Amazonian women and lands.

Da Rocha's words came back to me two days after Querida Amazonia was released, when NCR published Carli Pierson's disturbing commentary on the horrors of feminicide in Mexico. Feminicide is "the killing of females by males because they are female," and it has become such an epidemic in Mexico that some believe it should be declared a national emergency.

Pierson says that at least one priest, Fr. Alejandro Solalinde, a human rights activist, made the important connection between church teaching and the women's suffering. Solalinde, she writes, "apologized to Mexican women who have suffered 'discrimination, mistreatment or have been killed.' He also apologized for the Catholic Church, 'which has been the one that has transmitted patriarchal, macho prejudices.' "

May our next pope be able to connect the church's sexism to the global suffering of women, and may he be willing to speak about it just as fearlessly.