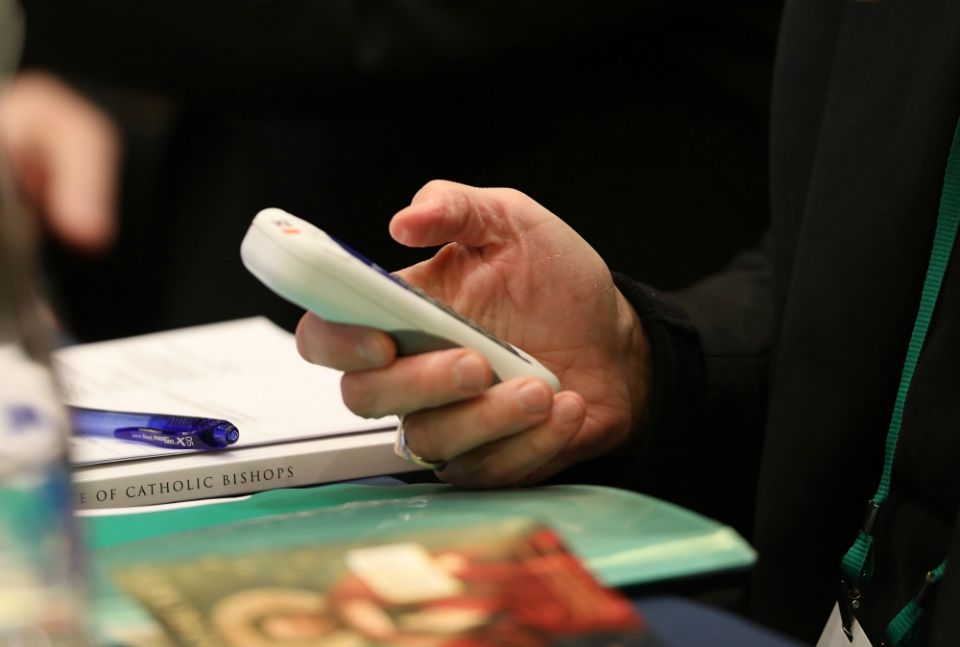 A bishop casts his vote during last year's fall general assembly of the U.S. Conference of Catholic Bishops in Baltimore Nov. 11, 2019. (CNS/Bob Roller)

The U.S. bishops' conference begins its virtual plenary session this afternoon. On Friday, I looked at what I thought they should be discussing today and tomorrow. Sadly, if they do have that discussion, it will likely be mostly during executive session.

This morning, let's look at the conference's public agenda and especially at the elections of new committee chairs. Your average Catholic in the pew may not care who leads the Communications Committee at the U.S. Conference of Catholic Bishops, or the Pro-Life Activities Committee, but it matters a lot to the direction the conference will take in the years ahead.

Overall, one question has hung over the conference's meetings for seven years now: Will the U.S. bishops continue to resist the direction Pope Francis is trying to steer the church or will they engage his evangelical vision?

The first order of business will be addresses from the papal nuncio, Archbishop Christophe Pierre, and from the conference president, Archbishop José Gomez of Los Angeles. Pierre is a diplomat and Gomez is one of the most mild-mannered people you could ever want to meet, so I do not expect fireworks in either address. Yet both men must address the recent report about former Cardinal Theodore McCarrick.

Of course, both must recommit the church to eradicating the scourge of clergy sex abuse, but it will be interesting to see how much either or both of them acknowledge the indictment of the clerical culture that report contained: a pope none-too-curious about the veracity of serious allegations about a prospective cardinal, bishops willing to lie to protect a friend and mentor, a diplomat — I am talkin' about you, Viganò! — who did not carry out an investigation when requested, only to later complain that he was the only one trying to hold McCarrick accountable.

The most important vote is likely a foregone conclusion: It has been almost two decades since the bishops did not elevate the priest currently serving as associate general secretary to the top job, and I anticipate this year will be no exception: Msgr. Jeffrey Burrill will likely be elected general secretary. He will be a significant improvement over the current general secretary, Msgr. Brian Bransfield. Bransfield's hauteur is infamous and his willingness to indulge the worst instincts of the culture warriors on the staff has been pronounced. Burrill is conservative, to be sure, but he is a pleasant man with a solid Roman education.

The Committee on Priorities and Plans is one of the most important committees at the conference — its members select the nominees for committee chairs among other responsibilities — and here the bishops face the worst of choices.

Archbishop Timothy Broglio of the Archdiocese for the Military Services was the longtime assistant of Cardinal Angelo Sodano, the former Vatican secretary of state who came out of the McCarrick report looking good, but if there was a similar report on Legionaries of Christ founder Fr. Marcial Maciel Degollado, I suspect Sodano's record might not be so clean. Bishop Daniel Thomas of Toledo, Ohio, was ordained a bishop by Cardinal Justin Rigali, and it is my firm belief that Rigali ruined everything he touched.

Still of the two, I would vote for Thomas. At least we have no reason to think the pope has a personal dislike for him. Elisabetta Piqué's biography of Pope Francis indicated that while still in Argentina, the future pope made a play on words about Broglio's name, saying, "He is the one who cheats you."

The death of Bishop George Murry of Youngstown, Ohio, last year has left a vacancy for chair of the Religious Liberty Committee. The candidates are New York Cardinal Timothy Dolan and Miami Archbishop Thomas Wenski. The committee should be disbanded, so I would vote for Wenski: The one time I was invited to speak to a bishops' committee meeting, Wenski nodded off during the presentation that preceded mine. If we can't abolish the committee, better to have a chair who nods off during meetings.

For the record, I rearranged my presentation on the fly, placing climate change right at the top, so I could rouse the slumbering archbishop by saying, "Climate change is urgent! Poor Archbishop Wenski! His whole archdiocese is going to be underwater if we do not make progress on this issue!" He did not nod off for the rest of my brief talk.

The Committee on Pro-Life Activities shows one of the more obvious ideological cleavages of any race this year. Denver Archbishop Samuel Aquila is a culture warrior out of conviction, while Baltimore Archbishop William Lori is only a culture warrior when it suits his purposes. Lori is by far the better communicator, so I expect he will get the nod.

Speaking of communications, the bishops have two excellent choices for the chairmanship of the Communications Committee: Bishop Christopher Coyne of Burlington, Vermont, and Boston Auxiliary Bishop Robert Reed. Both men would bring competence and experience to the job. Although Coyne has all the responsibilities that go with being an ordinary, his diocese has only 118,000 Catholics, and Reed is pastor of a parish as well as a regional vicar. I would give the nod to Coyne, who has some non-New England experience, having served in Indiana as an auxiliary bishop when Archbishop Daniel Buechlein of Indianapolis was gravely ill.

The Doctrine Committee also presents two fine choices, Bishop Daniel Flores of Brownsville, Texas, and Bishop Brendan Cahill of Victoria, Texas. I am partial to Flores from our years together in the "smokers' caucus" during coffee breaks and his participation in the Catholic Conversation Project, where he mingled easily with young theologians of various ideological backgrounds. But I have heard good things about Cahill, too.

For the Committee on National Collections, the clear choice is Bishop Shawn McKnight of Jefferson City, Missouri. He faces Bishop James Wall of Gallup, New Mexico, whose interest in the arts does not overcome the impression he is stuck in the past: Wall said that during their ad limina visit with Pope Francis, when the pope asked what they would talk about, Wall brought up Humanae Vitae. Now, I love Humanae Vitae as much as the next guy, but I do not think it would be at the top of my list of things to discuss with Pope Francis.

I do not know the two candidates for the Committee on Cultural Diversity. Detroit Auxiliary Bishop Arturo Cepeda is running against Denver Auxiliary Bishop Jorge Rodríguez-Novelo. The chancery in Denver has served as the Pentagon for the culture wars for 30 years, but sometimes in a large archdiocese, it is the Latino auxiliary who breaks the rule. It makes sense that both nominees are Latino, given the demographic changes in the church, but the discussion of racism will need to be led by an African American because the experiences of the two groups are often quite different.

Of all the contests, the race for chair of the Education Committee represents the clearest ideological divide. Bishop Thomas Daly of Spokane, Washington, faces Archbishop Gregory Hartmayer of Atlanta. I called attention to Daly recently when he criticized a speech by San Diego Bishop Robert McElroy about faithful citizenship. It was like watching a rowboat attack the Nimitz. I am in favor of giving Daly some theological education, not of putting him in charge of a committee tasked with education. I do not know Hartmayer, but people who do say he is a moderate in terms of ideology but a pastor at all times. If the bench picks Daly over Hartmayer, the nuncio should ask to give a second talk and announce apostolic visitations of the whole country.

A press release from the conference stated the bishops will discuss the challenges posed by the pandemic. Here, too, we will see which way the wind is blowing. As I mentioned Friday, through most of the spring, the bishops did what was asked of them — as did most Americans — by shutting down public liturgies. Only a few have been waving the flag of religious liberty, clamoring for the right to ignore public health regulations.

The bishops as a body must understand that pursuing a religious liberty angle in facing the pandemic represents tossing aside 2,000 years of theological tradition about the relationship between the faithful and civil authorities. I need scarcely add that none of the bishops are experts in public health.

The nation is heading into a long, grim winter. Our national Nero in the White House is tweeting about election fraud while the number of new cases, new hospitalizations and more deaths soars. If the bishops ignore the common good for any reason, they will be endorsing functional euthanasia.

The official agenda lists some other topics but, overall, the agenda seems thin, given the challenges the church and the nation face. Maybe that is better. Maybe it is best for the bishops to think about how they are going to approach the culture in the next few years, and what kind of confreres they want leading the committees that will chart that course.

Maybe they will have time to think, too, about this fact: This time last year, their ad limina visits were in progress but it is still far from clear that the American hierarchy supports the Holy Father. He, remember, told them in 2018 that they should consider canceling their meeting and go on retreat. They held the meeting anyway, but they eventually did have a group retreat. They will need many more such retreats if they are to recenter themselves on the saving ministry that has been entrusted to their care as successors of the apostles.

Column | Bishops' conference elections: why they matter and what they portend