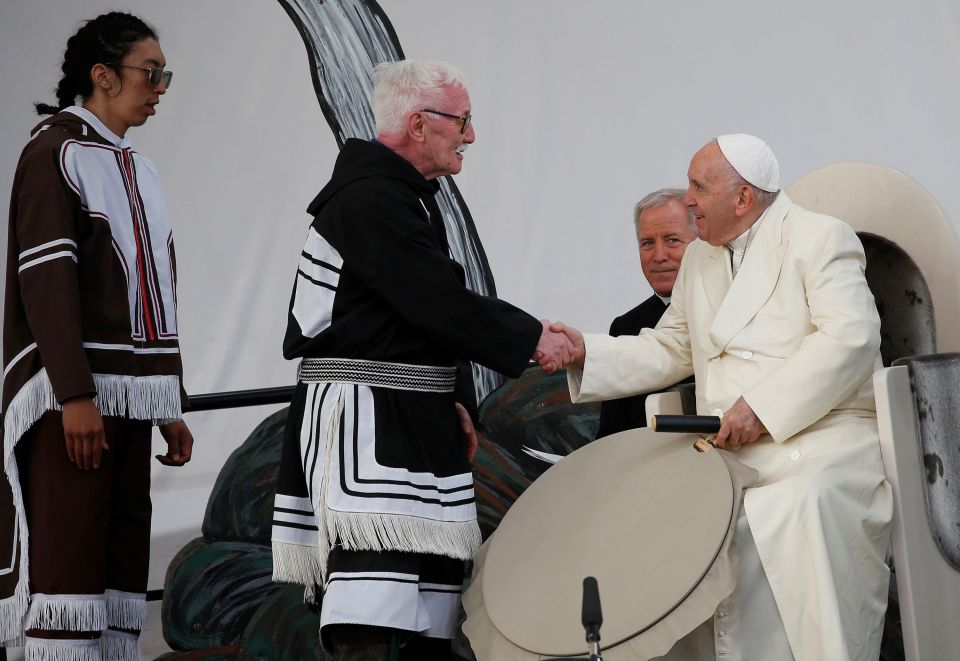 Elder Piita Irniq and youth drum dancer Malachai Angulalik Mala present Pope Francis with a traditional drum during a meeting with young people and elders outside the primary school in Iqaluit in the Canadian territory of Iqaluit, Nunavut, July 29. It was the final day of the pope's weeklong visit to Canada, where he met with Indigenous peoples and apologized for the Catholic Church's role in residential schools. (CNS/Paul Haring)

IQALUIT, Nunavut — Pope Francis concluded the final day of his weeklong "penitential pilgrimage" through Canada on July 29 at one of the most remote locations he has visited since election as pope in 2013. He again apologized for abuses Indigenous peoples endured in Catholic Church-run residential schools, and used his location in the Arctic to spotlight environmental concerns.

"I want to tell you how very sorry I am and to ask for forgiveness for the evil perpetrated by not a few Catholics who contributed to the policies of cultural assimilation" in those schools, the pope said here in the capital of the territory of Nunavut.

In Iqaluit —  with a population below 7,500 people and no paved roads — the pope again met with survivors of residential schools, which for nearly a century forcibly stripped away many Native cultures and customs, including the Inuktitut language.

The pope paid tribute to this history on the final stop of his Canadian tour, saying that the language the Catholic-run facilities had sought to suppress was "beautiful" and welcoming a performance of song and dance by local Inuit artists.

The pope acknowledged the painful testimonies he had heard from Indigenous survivors, including one who noted that before the residential school systems, "grandparents, parents and children were harmoniously together," likening it to springtime, "when young birds chirp happily around their mother."

"But suddenly — he said — the singing stopped: families were broken up, and the little ones were taken away far from home," the pope recalled. "Winter fell over everything."

"How evil it is to break the bonds uniting parents and children, to damage our closest relationships, to harm and scandalize the little ones," Francis lamented.

Throughout his trip, Francis has repeatedly apologized for the church's role in the Canadian government's residential school program and its support for policies that included forced assimilation of Indigenous peoples. The pope's apologies fulfill a central demand of the 2015 Canadian Truth and Reconciliation Commission's final report.

But as he leaves Canada, some survivors remain frustrated that the pope has not used the visit to formally rescind the Doctrine of Discovery, which offered a theological justification for the colonization of Indigenous lands, or to return Indigenous artifacts held in the Vatican Museums, which some say had been wrongfully acquired.

Melinda Tautu, who traveled to Iqaluit from Chesterfield Inlet with her father, a residential school survivor, said he was optimistic that today would mark a turning point in his healing process.

“I want him to move on,” she told NCR. “I want that innocence back that he lost.” 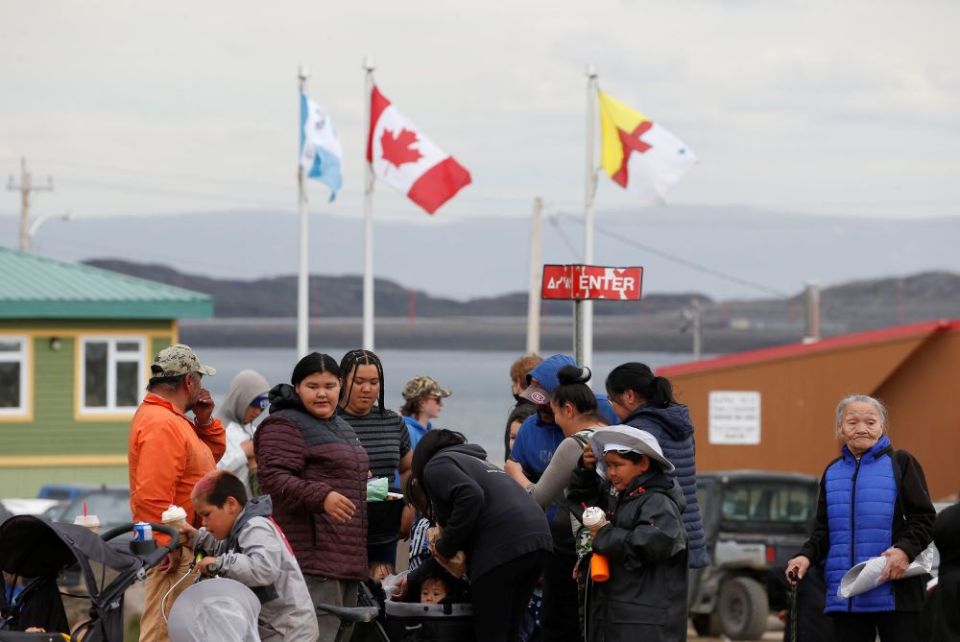 People wait for the start of Pope Francis' meeting with young people and elders outside the primary school in Iqaluit, Nunavut, July 29, 2022. (CNS photo/Paul Haring)

Iqaluit resident Mary-Lee Aliyak said she believed the pope’s apology was a good and necessary first step, but only that.

After the pope leaves, she said she would like to see both the church and the government provide funding for healing centers to treat addiction.

Aliyak also expressed frustration that taxpayer dollars were being used to cover the cost of the trip.

The Canadian government gave the church money to educate and care for children in residential schools, she said.

“Many of these children were starved, raped and pillaged,” said Aliyak. “They should give it back.”

In addition to his primary focus on apologizing for the church's treatment of Indigenous peoples, Francis' time in the isolated town of Iqaluit — the second most remote area ever visited by a pontiff, after Pope John Paul II's 1984 visit to Fairbanks, Alaska — allowed Francis an opportunity to underscore one of the central themes of his papacy: care for the environment.

"There is a beautiful relationship between you and this land you inhabit," he said.

The territory of Nunavut has a population of just under 40,000 residents and is twice the size of Texas. In recent years, sea ice has continued to melt at a rapid pace and the region's fish supply has started to diminish as a result of extreme weather conditions.

"This land, like every individual and every people, is also fragile, and needs to be cared for," Francis said. "Caring, teaching and learning how to care: to this task young people in particular, supported by the example of their elders, have been called!"

Following a scaled-back departure ceremony, in keeping with the overall somber nature of this visit, Francis will fly back to Rome, landing in the early morning July 30. An onboard press conference is scheduled during the flight.

Network connects indigenous knowledges in the Arctic and U.S. southwest