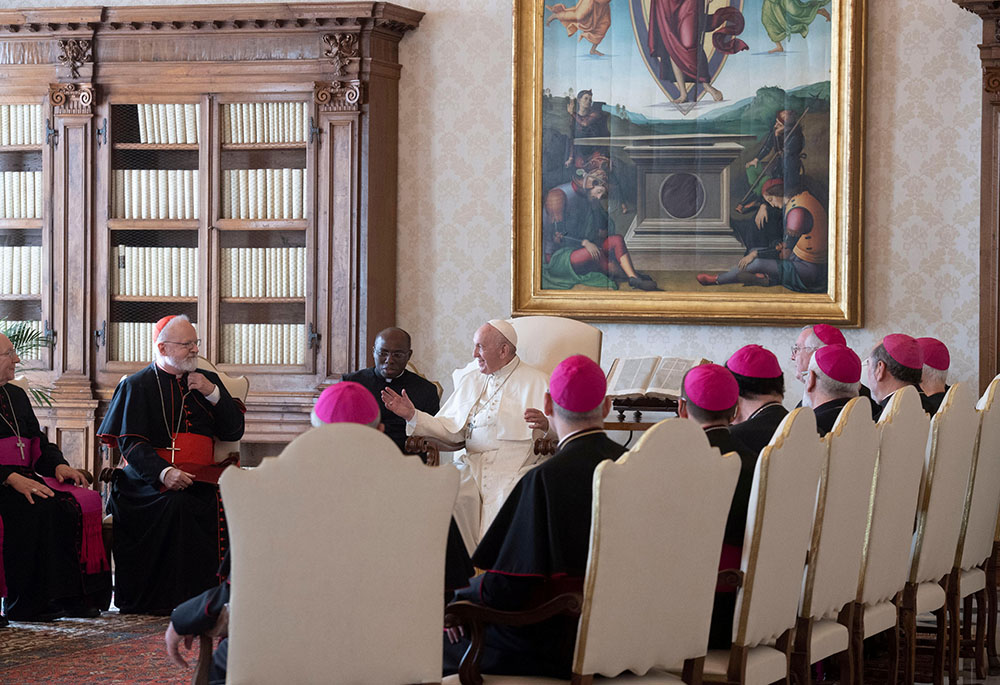 Pope Francis speaks to Boston Cardinal Sean O'Malley, second from left, alongside other U.S. bishops during their "ad limina" visits at the Vatican Nov. 7, 2019. (CNS/Vatican Media)

If personnel is policy, then a vote last month by the U.S. bishops to draft a controversial document on Communion that the Vatican had cautioned against reveals Pope Francis may have considerable work ahead of him in his efforts to get the American Catholic hierarchy to embrace his priorities.

Although the U.S. Conference of Catholic Bishops has taken great efforts to walk back its own mixed messaging and now insists the eventual document will not address whether pro-choice Catholic politicians like President Joe Biden can receive Communion, the vote of 168-55 to move forward appears to indicate that, after eight years of the Francis papacy, the U.S. bishops' conference is still controlled by a majority of bishops out of sync with Rome.

"I thought that they had made more progress than that vote showed," said Jesuit Fr. Thomas Reese, a veteran Vatican observer and senior analyst for Religion News Service. "I was expecting the vote to be about 50/50."

While Reese noted that it is hard to know what was motivating each individual bishop, especially given the conflicting messaging about whether the document would address Catholic politicians, he told NCR it was still significant that a supramajority voted to move forward in light of the Vatican's doctrinal office urging the bishops to tap the brakes on their plans.

Yet if Francis, who turned 84 in December* and was hospitalized last week for the first major health scare of his papacy, is seeking to pick up the pace of episcopal appointments with bishops more aligned with his agenda, he does have a number of opportunities on the horizon. 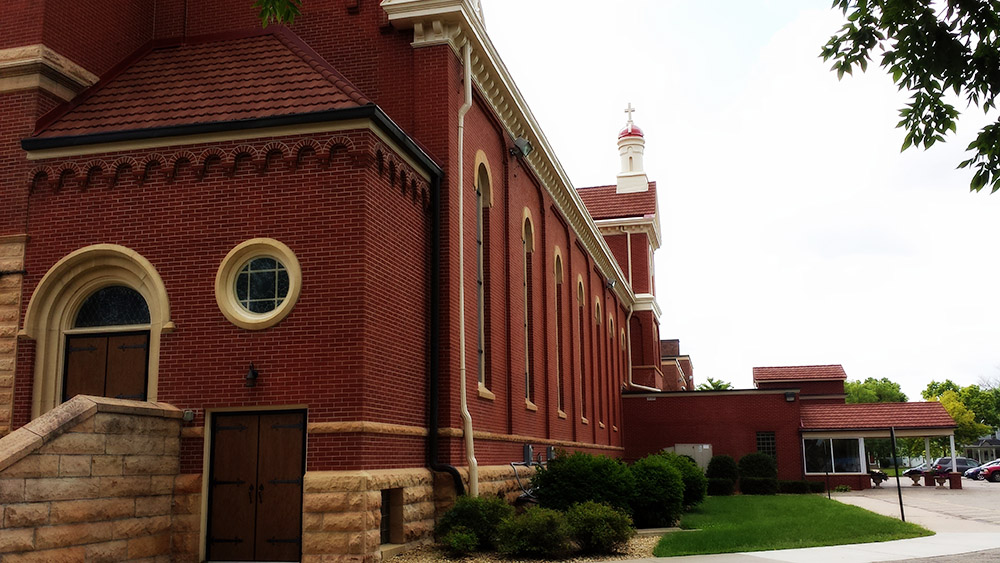 The Cathedral of the Holy Trinity in New Ulm, Minnesota. One of three currently vacant dioceses in the United States, the New Ulm Diocese has been without a bishop since August 2020. (Wikimedia Commons/Gabriel Vanslette)

To date, three dioceses in the U.S. are currently vacant, another nine bishops have already passed the age of 75, when bishops are required to submit their resignation to the pope, and there are several other dioceses that will soon open.

In addition, the nine bishops who have already reached retirement age are:

Minnesota has a total of seven dioceses, most of which have been affected by clergy abuse scandals. With already two vacant dioceses and another two where the ordinary has reached retirement age, the pope has an opportunity to dramatically reshape that state's Catholic leadership.

DiMarzio is currently under investigation for allegations of sexual abuse, which he has denied.

DiMarzio's megadiocese of Brooklyn has a population of more than 1.5 million Catholics, making it the largest diocese in the country and larger than most archdioceses. Its new leader will oversee one of the country's best-funded Catholic media operations, as well as play a key role in the diocese's shared seminary system with the New York Archdiocese and Rockville Centre Diocese. 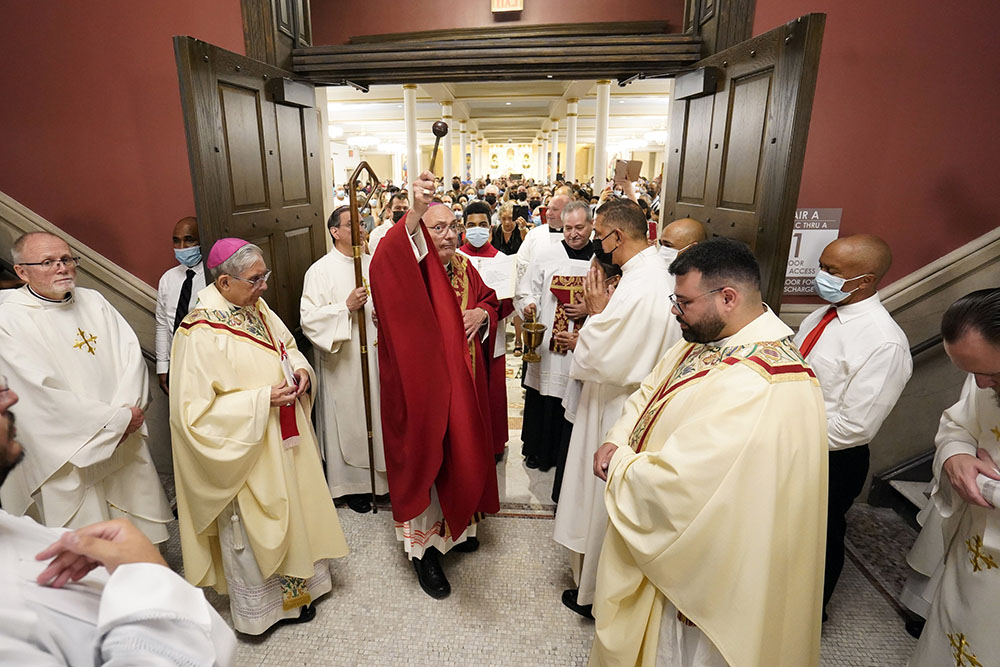 Three other bishops, including one metropolitan archbishop, will also reach retirement age in the coming months:

Kurtz is a onetime president of the U.S. bishops' conference. Olmsted, who leads the diocese of the fastest-growing city in the United States, has been one of the more vocal U.S. prelates in support of the Communion document and has long been tied to a number of conservative Catholic organizations, many of them hostile to Francis.

Catherine Hoegeman*, co-author of Catholic Bishops in the United States, told NCR that one major determining factor in the appointment of new bishops will be "What does the priest pool look like right now?"

"That's just a question that is going to influence everything," she observed, adding that even if Francis seeks to appoint bishops more aligned with his agenda, the options may be limited as "he's still drawing from a more traditional, conservative priest base," and hence, the bench for new Francis-minded priests who could become bishops may be limited.

Based on Hoegeman's own data, she said that among the ordinaries leading U.S. dioceses right now, 53 were appointed by Pope John Paul II, 70 by Pope Benedict XVI, and 79 by Pope Francis.

Yet she warned that just because a bishop was named by Francis, it does not necessarily mean they are in the mold of Francis, noting that in many respects the pope is "playing catch-up" after being ill-served by the now disgraced former papal nuncio to the U.S. Archbishop Carlo Maria Viganò.

Until his resignation in 2016, Vigano was responsible for preparing the list of names for potential episcopal appointments that were sent to the Vatican's Congregation for Bishops, which advises the pope on potential bishop nominations.

Reese said in looking back over the last eight years, he does not believe Francis has understood or prioritized the importance of selecting bishops in the United States.

By contrast, Reese noted, "John Paul understood that and he really remade the American episcopacy." The late Polish pope named archbishops who "were supportive of his views and policies" — whom he could rely on to make suggestions and vet other candidates for diocesan appointments in their region, Reese said.

"Francis' top priority is 'Is he pastoral? Is he concerned about the poor?'," said Reese. "It's not about whether he's loyal to Francis or not, which was the only issue that mattered under John Paul."

"I think Francis wasted a lot of years in not getting control of the appointment process and making sure that there were people that he wanted," Reese added.

He also expressed dismay as to why Francis has not yet replaced Canadian Cardinal Marc Ouellet, head of the Congregation for Bishops. Ouellet, who is 77, was named to the post in 2010 by Benedict XVI. 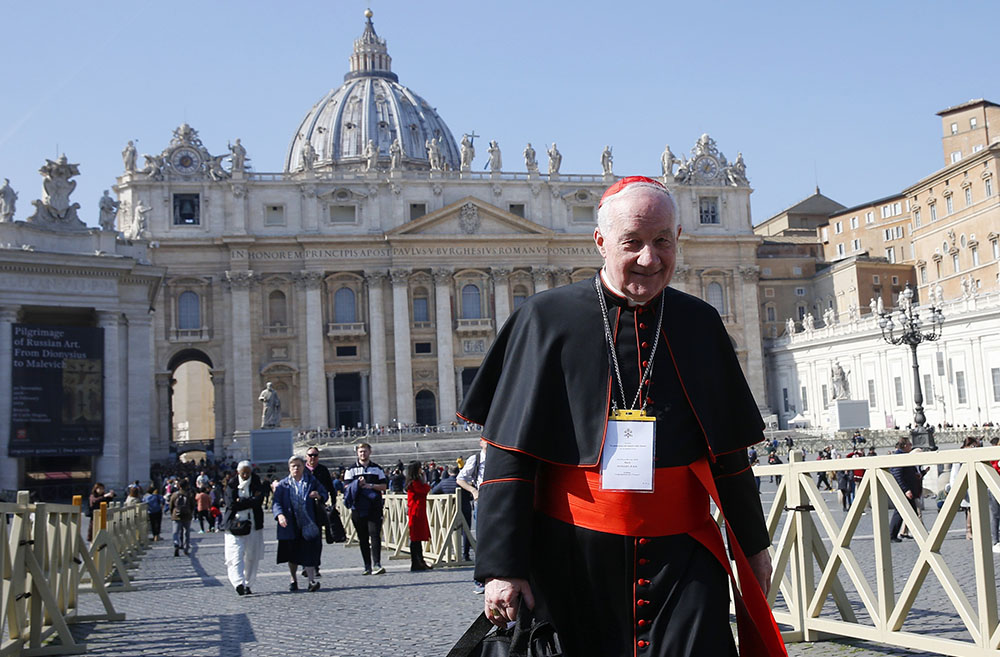 Cardinal Marc Ouellet, prefect of the Congregation for Bishops, walks through St. Peter's Square at the Vatican in February 2019. (CNS/Paul Haring)

To date, the two American members of the Congregation for Bishops are Chicago Cardinal Blase Cupich, who has served in that role since 2016, and newly added Cardinal Joseph Tobin of Newark, New Jersey. Both are considered among the pope's closest allies in the U.S. church.

Reese said that while their influence on the congregation is significant, it still requires having the right men for the job back at home and the top leadership in the Vatican to help push through candidates best suited to implement the pope's agenda.

He added that John Paul II had nearly three decades to remake the American church hierarchy and that it took him seven years before he had replaced all of the top people in the Vatican bureaucracy with his appointments.

Given that reality, said Reese, it may take "one or two more popes or a few miracles to turn around the Catholic Church in the United States."

*This story has been changed to correct Pope Francis' birthday.

*Due to editing error, this article has been corrected to use the interviewee's preferred title.

A version of this story appeared in the July 23-Aug 5, 2021 print issue under the headline: The changing face of the US episcopacy.