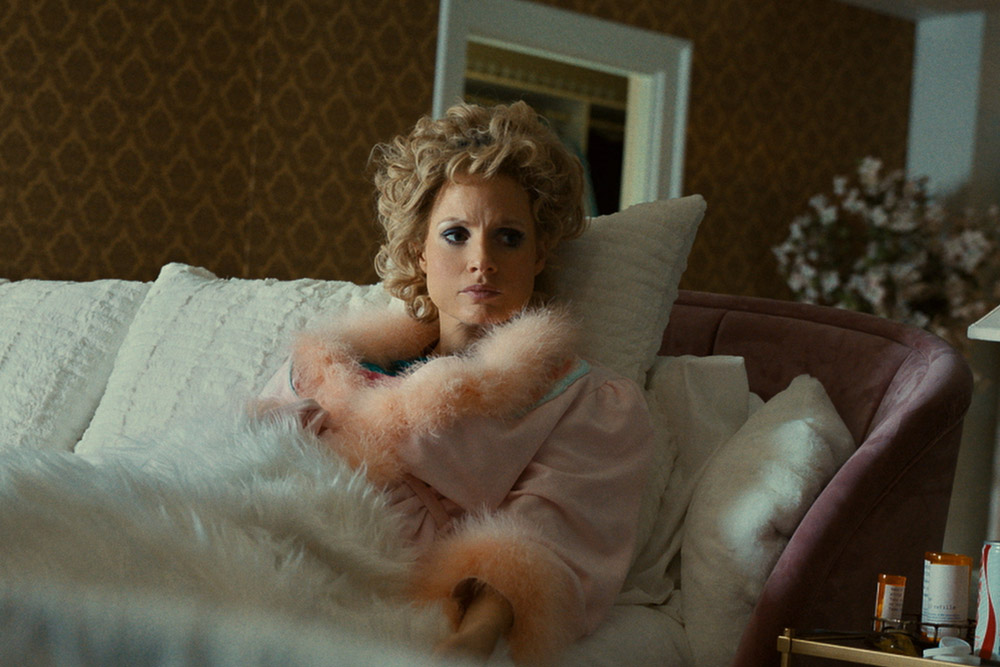 Jessica Chastain stars in the title role of "The Eyes of Tammy Faye." (Courtesy of Searchlight Pictures)

From the time she is a child (Chandler Head), we see that Tammy Faye loves the Lord. Her divorced and remarried mother (Cherry Jones), doesn't want Tammy Faye, the child of her first marriage, to draw attention to herself at services because she doesn't want to lose her job and be ostracized by the church. But young Tammy Faye is bold and unafraid of what people think.

Tammy Faye, played by the talented Jessica Chastain, attends the North Central Bible College in Minneapolis, where she meets Jim Bakker (Andrew Garfield). They become friends, marry in 1961 and move to South Carolina. Soon they decide to go on the road as a traveling ministry, crisscrossing the country with Bakker preaching and Tammy Faye singing and playing the accordion.

Tammy Faye has always loved puppets and in 1964, she and Bakker go on television for the first time with a puppet ministry show for children for Pat Robertson's Christian Broadcasting Network (CBN). Bakker wants to host the late-night show "The 700 Club" and Robertson agrees, but only if the puppet show is a success. It is, and Bakker becomes the show's first permanent host. As for Tammy Faye, she just loves people and wants them to know that God loves them, too.

I interviewed Jessica Chastain about her decision to make this narrative film, which is based on the 2000 documentary of the same title. 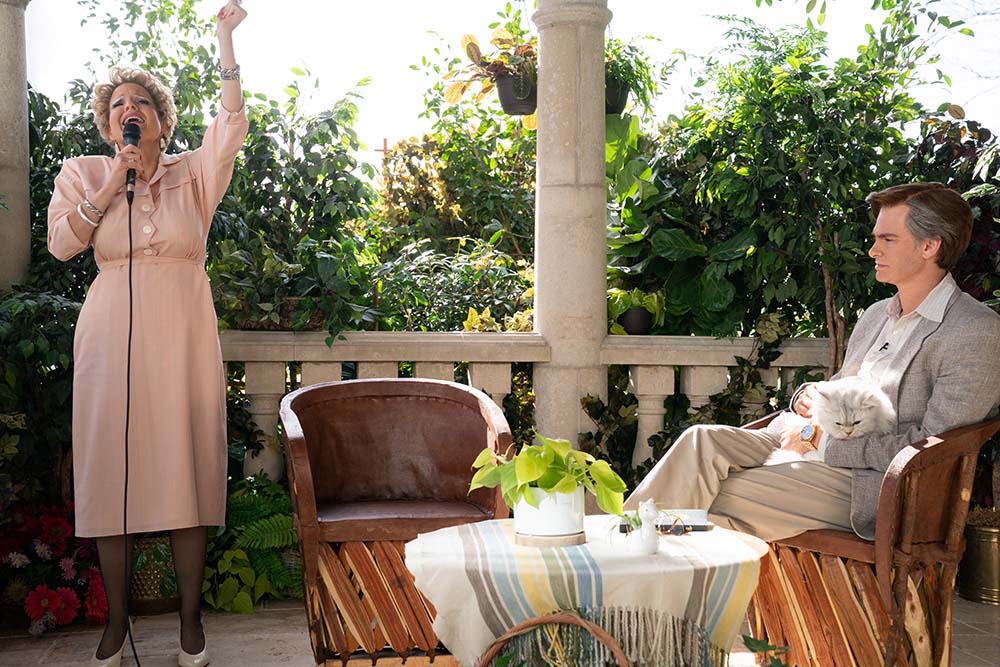 Chastain described the connection she felt to Tammy Faye. When she realized what a deeply loving person Tammy Faye was, she wanted to star and produce the film.

The Bakkers leave CBN in 1972 and co-found Trinity Broadcasting Network in 1973, but the collaboration does not last. In 1974, they create the PTL (Praise the Lord) Club in Charlotte, North Carolina, the first show and evangelical network to be broadcast via satellite, reaching millions of homes.

The Bakkers' success interests the televangelist Jerry Falwell (Vincent D'Onofrio) though he disapproves of the Christian theme park the Bakkers are building, "Heritage USA." It becomes one of the top three theme parks in America, following Disneyland and Disney World. Roe Messner (Sam Jaeger) is their property developer and he becomes enmeshed in the Bakkers' plans and dealings.

Troubles begin for the flashiest and most popular televangelists to ever preach on America's airwaves. Bakker's prosperity gospel message and ability to raise money on air is astonishing, and Tammy Faye's over-the-top hairstyles and makeup and expensive wardrobe catch the attention of the Federal Communications Commission for misappropriating funds.

In 1980, Bakker, in a humiliating moment, exposes Tammy Faye's affair with a Grammy award-winning country singer, Gary Paxton (Mark Wystrach), and makes her beg for forgiveness from the audience during their live show. Bakker also gives her pills to lessen her anxiety and she becomes addicted. She goes into rehab.

Not long after, church secretary Jessica Hahn accuses Bakker and another preacher of rape. Messner delivers the cash to Hahn to buy her silence.

During this time, rumors also begin to swirl that Bakker is gay.

By 1985, the AIDS epidemic is devastating communities all across the country, and Tammy Faye does something no other televangelist will consider: She interviews a gay minister, Steve Pieters (Randy Havens) on live television. Her compassion for those suffering from AIDS becomes legendary over the years.

Chastain describes the grace Tammy Faye had on her show for a community that was suffering and being stigmatized by many Christian communities. "This was at a time when people were not even talking about AIDS, people were dying, communities were being wiped out, and there's this woman who says to a gay man on television, 'I want to put my arms around you,' " Chastain told me. 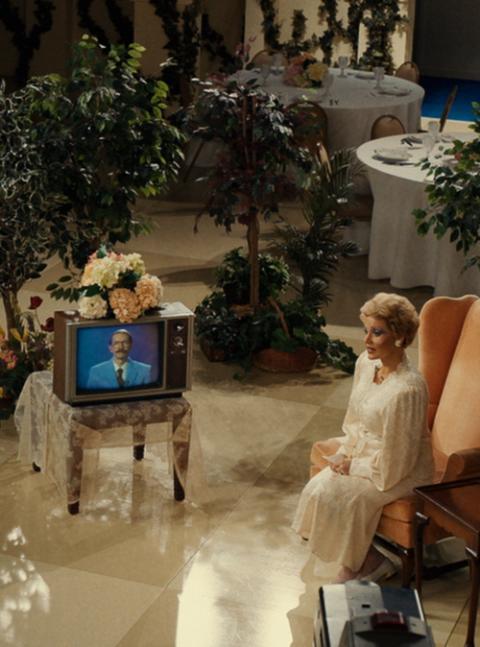 "When Steve told Tammy Faye about how he came out to his parents and they were sad but loved him no matter what, she replied, 'Thank God, because we as mommies and daddies need to love through anything, because that's the way of Jesus.' We need to hear this so much now," she added.

Falwell strongly disapproves of Tammy Faye's ministry to gay people. He offers to help save Heritage USA and PTL when the cover-up of Hahn's rape is exposed in 1987. However, he sends it into bankruptcy, and by 1989, Bakker is convicted of fraud and other crimes. It is the end of the PTL Club.

Oral Roberts and Billy Graham were among the first of the national televangelists (some would include Bishop Fulton Sheen, too, and even Mother Angelica), yet Jim Bakker and Tammy Faye, and many local televangelists emerging in the '60s, '70s and '80s, were right there with them. What set Bakker and Tammy Faye apart, however, was that along with preaching the prosperity gospel, along with their love of bling and ability to fundraise — even after Bakker's indictment — was that they also fed the hungry, clothed the poor, and housed homeless, expectant young mothers at Heritage USA.

The Bakker children are not featured in the film except as infants, and Chastain told me she was talking with them even before the film was greenlighted. She wanted to stay away from anything salacious and pull the story out of the tabloid culture that it has lived in for so long.

"I didn't feel there was a proper reason to involve the children or even Jessica Hahn," Chastain told me, adding, "I wanted people to pay more attention to what Tammy Faye did and what she said. Her story is so much more than how much mascara she wore. I wanted to change the culture of how people saw Tammy Faye."

Chastain sings several of the songs that Tammy Faye sang on television, but she felt very much out of her "comfort zone" when singing. Especially noteworthy is the final song, in which she sings at a televised gala for Oral Roberts. Chastain also nails Tammy Faye's speaking voice and mannerisms.

"She is not a caricature, nor is she a deep person. But she is a deeply loving person," said Chastain. "She wanted to bring peace and grace to people. She genuinely loved them."

The film's focus on Tammy Faye's desire to be seen, and to see and understand the world around her, is clear from the film's beginning. We watch Chastain capture this when she explains to a makeup artist that the dark lines around her eyes and lips are permanent, just waiting to be enhanced with eye shadow and lipstick.

Throughout the story, she seems superficial and too childish to accomplish, with Jim Bakker, all that they did in such a brief time. And her mother warns her in the film, "Tammy Faye, if you follow blindly, in the end all you are is blind."

But Tammy Faye is more than her limitations; in fact, she transcends them.

Chastain's empathetic performance of Tammy Faye, who died of cancer in 2007, is respectful of her simplicity and honest about her flaws, many of which she was not terribly aware.

Andrew Garfield's performance is honest, too, and shows the more complex and knowing dimensions of Jim Bakker's character before he went to prison. D'Onofrio is intimidating as Jerry Falwell, and Falwell's well-documented homophobia is clear in the film.

I asked Chastain how she would express Tammy Faye's legacy. She said, "God's grace is love and everyone is deserving of love."