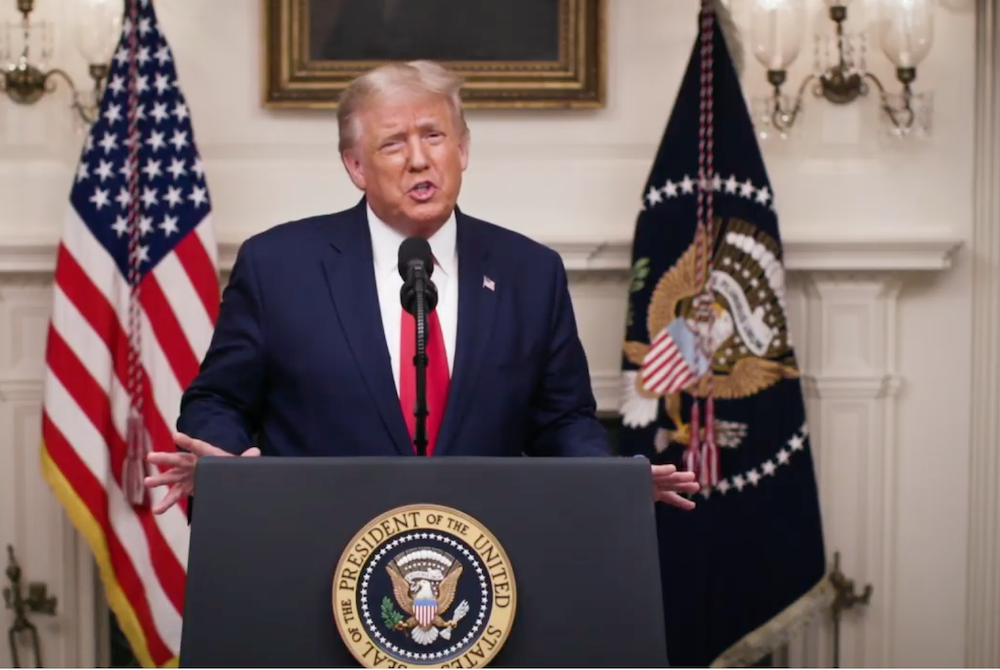 President Donald Trump addresses the Sept. 23 National Catholic Prayer Breakfast in a prerecorded video from the White House at the close of the livestreamed event. (NCR screenshot)

As President Donald Trump's campaign seeks to shore up declining Catholic support ahead of the November election, the president appeared at the conservative-run National Catholic Prayer Breakfast Sept. 23, where he announced he was signing an executive order to protect all infants born alive.

While he did not offer specifics on the order, he said it would ensure that medical care will be provided to all infants regardless of their circumstances.

"Every child, born and unborn, is made in the holy image of God," said the president. "I will always protect the vital role of religion and prayer in American society, and I will always defend the sacred right to life."

Trump, who in April declared himself to be the best president "in the history of the church," spoke for only three minutes in a prerecorded video from the White House where he recalled growing up next to a Catholic church in Queens, New York, and praised Catholic schools for their work among underserved populations.

"Catholics of all backgrounds share the love of Christ with the most vulnerable as they care for the elderly, the homeless and neighbors in need," he said. "Our nation is strong because of Catholics and all people of faith."

Attorney General William Barr also spoke at the event, where he said that "no concept is more misunderstood than the separation of church and state." In a speech that cited George Washington, John Adams and Alexis de Tocqueville, among other historical figures, he said that "militant secularists have seized on" a false understanding of church and state and that a "new orthodoxy that is actively hostile to religion" has become the dominant view.

Barr, one of the most prominent Catholics in the Trump administration, received the "Christifideles Laici" award for service to the church, and in his 10-minute speech, warned that "traditional morality has eroded, and secularists have often succeeded," first in the realm of education, and which he said has spread to a number of other institutions. 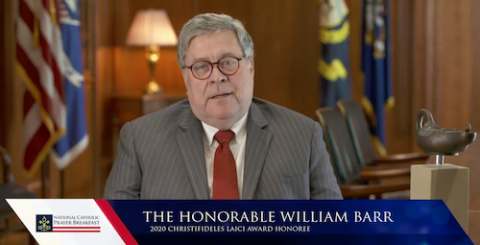 As attorney general, Barr has adopted a controversial and often harsh law-and-order approach to his role, even ordering the use of tear gas to clear out peaceful protestors in June for the president to have a photo op in front of St. John's Episcopal Church. On Wednesday, however, he warned against the rise of a strong central government.

In recent years, said Barr, the United States has experienced an uptick in urban violence, drug abuse and broken families, which "reduces citizens as wards of the state." People of faith, he said, "cannot be complacent about these trends."

Both Barr and Trump were introduced by Leonard Leo, a conservative legal activist who the Trump administration has relied heavily on to shape his judicial picks. He praised Barr's controversial address at the University of Notre Dame last October where he lamented rising tides of moral relativism.

"He spoke truths that are often forgotten in the elite circles of our country," said Leo. Of Trump, Leo said that the president has defended the sanctity of human life "more than any other president in my lifetime."

Keynoting the virtual breakfast was Auxiliary Bishop Robert Barron of the Archdiocese of Los Angeles and founder of the digital ministry Word On Fire, who spoke of American founder Thomas Jefferson who penned the U.S. Declaration of Independence defending unalienable rights, and of the 18th-century Spanish missionary, St. Junípero Serra, who founded Catholic missions in California and evangelized native Americans.

"Thomas Jefferson was able to say the things he said," said Barron, "because at least to some degree he had been evangelized. He had heard the good news," adding what Jefferson said on the East Coast of the country, Serra was doing on the West Coast. He hailed this as a "coming together of the Gospel and democracy."

While Serra's treatment of natives has come under scrutiny, and in recent months statues of the Franciscan missionary have been taken down or toppled throughout the country, Barron said that Serra was not interested in military power, but instead his dominant passion was that of evangelization.

Barron said that the two great movements in U.S. history — that of the abolition of slavery and the push for civil rights — have been "led by people who had been deeply evangelized." He argued against what he labeled as a growing "tendency to privatize religion," saying it is "repugnant to the nature of Christianity" and "repugnant to the health of a democracy."

While he did not challenge Barr on the death penalty as some Catholics had called for, he cited a historical example of Serra speaking against the execution of natives who had killed some of Serra's fellow Franciscan missionaries. Barron said that one could argue that this was the first argument against capital punishment made in the United States.

Coincidentally, it was Barron, in his capacity as the chairman of the U.S. bishops' committee on evangelization and catechesis, who was responsible for overseeing the vote among the U.S. bishops in June 2019 to update the U.S. Catechism for Adults to reflect Pope Francis' 2018 declaration that the death penalty is "inadmissable." 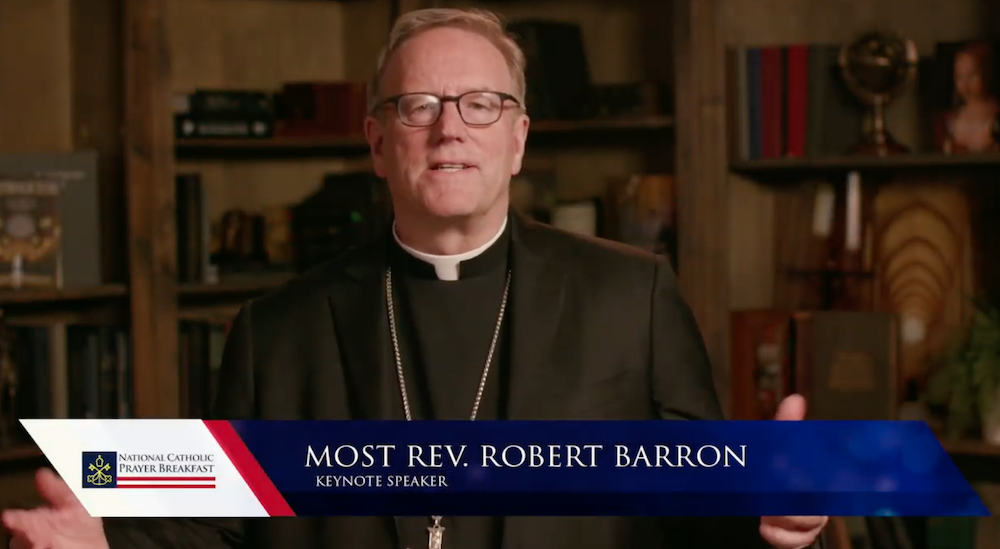 Mark Randall, a board member of the National Catholic Prayer Breakfast who also heads the fundraising department of the Pontifical North American College, served as host for the hourlong event. Fr. Paul Scalia, son of the late Supreme Court Justice Antonin Scalia, offered the opening prayer, and Congressman Dan Lipinski, a pro-life Democrat who lost his primary reelection bid earlier this year, led the Pledge of Allegiance.* The apostolic nuncio to the United States, Archbishop Christophe Pierre, offered greetings on behalf of Pope Francis, who expressed closeness to the U.S. as it struggles to fight for racial justice and as the country continues to struggle with the coronavirus pandemic.

The event, which was originally scheduled for March 30 but postponed due to the pandemic, took place virtually, meaning viewers were left to enjoy orange juice and croissants at home — or Bloody Marys for the numerous Catholics having a difficult time digesting the selection of this year's award winner.

The decision to honor Barr, who in July 2019 announced that the federal government would resume federal executions after a 17-year hiatus, has led to a chorus of outcries from Catholic groups across the country.

Just hours before the event began, Krisanne Vaillancourt Murphy, executive director of Catholic Mobilizing Network Against the Death Penalty, issued a statement saying "with this award for Mr. Barr, the 'National Catholic Prayer Breakfast' has become a twisted halftime show between executions, and could mislead the public to believe the Catholic Church somehow condones the death penalty. This is categorically false."

More than 6,000 individuals also signed a petition by the Catholic Mobilizing Network calling on Barr to end federal executions.

On the eve of the event, the U.S. bishops conference issued an unusually blunt statement against federal executions scheduled for this week.

In addition, the statement explicitly referred to both Trump and Barr by name, marking a rare departure for the bishops' statements who have typically shied away from doing so.

"We say to President Trump and Attorney General Barr: Enough. Stop these executions," the bishops' urged.

Earlier this month, the Association of United States Catholic Priests called on organizers to reverse their "scandalous decision" and also called on Barron to withdraw from his role with the event. In addition, the Santa Fe Archdiocese's Office of Social Justice and Respect Life issued a statement saying they were "appalled" by Barr being honored. "Let us not become the evil we despise," they wrote. St. Joseph Sr. Helen Prejean, a leading death penalty abolitionist, said the decision to honor Barr was a "a grievous scandal for the Church," and on Wednesday morning Speaker of the House Nancy Pelosi expressed dismay over this year's awardee. "There's a big difference between what Christ would do and what they're honoring this morning," Pelosi said during the launch of this year's Nuns on the Bus tour, organized by Network, a Catholic social justice lobby.

By contrast, retired Philadelphia Archbishop Charles Chaput, who was originally slated to deliver the keynote address in March, published his prepared remarks in the conservative journal First Things earlier this week. He praised Barr as having "a thinking Catholic brain, a character of substance, and a moral spine."

"As an added bonus," Chaput added, "he's disliked by all the right people. I want to thank the various and interesting critics of General Barr for confirming me in that judgment."

The National Catholic Prayer breakfast takes place each spring and typically brings together more than 1,000 Catholics to the nation's capital for a morning of prayer and speeches. The event, which is not officially sponsored by the institutional Catholic Church, was founded in 2004 as a response to St. Pope John Paul II's call for "a new evangelization."

While the event is billed a non-partisan gathering, past speakers have been predominantly conservative Catholics — among them former Acting White House Chief of Staff Mick Mulvaney, former Speaker of the House Paul Ryan, the late Supreme Court Justice Antonin Scalia — and Vice President Mike Pence and former President George W. Bush during four years of his presidency. Among this year's event sponsors were a number of conservative groups and institutions, including the pro-Trump organization Catholic Vote, the Knights of Columbus, the Franciscan University of Steubenville, Ohio, and the Catholic Association.

More than 3,500 viewers tuned in for the live broadcast of this year's event, which will air again on Saturday on EWTN.

*This story has been updated to clarify that Congressman Dan Lipinski is still in office.