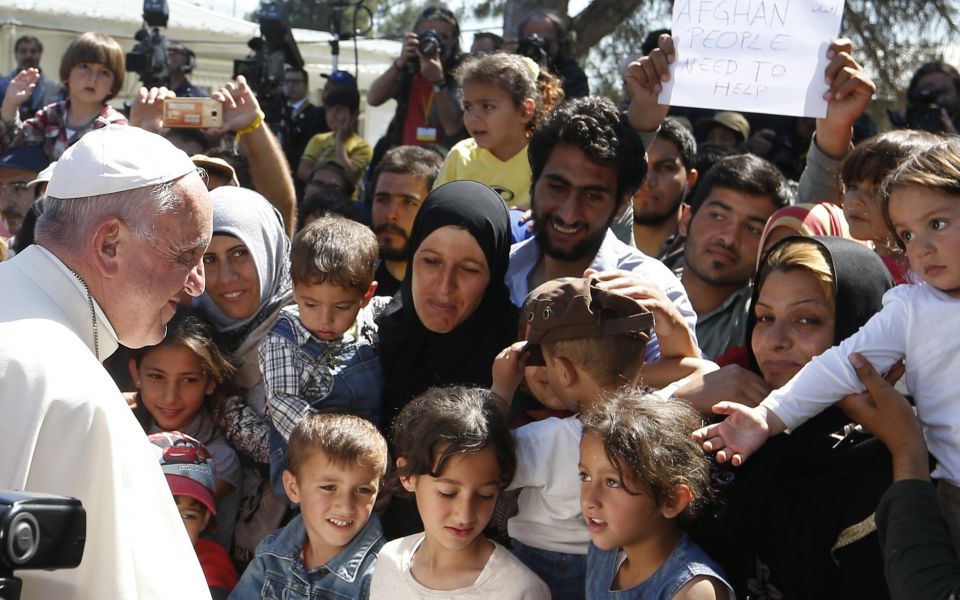 Pope Francis meets refugees at the Moria refugee camp on the island of Lesbos, Greece, in this April 16, 2016, file photo. During his trip to Cyprus and Greece Dec. 2-6, 2021, Pope Francis continued to hone his teaching on migration, appealing for action but also acknowledging that not every country can accept all newcomers. (CNS photo/Paul Haring)

ROME — Pope Francis marked his 85th birthday on Dec. 17 by meeting with 10 refugees who arrived in Italy from Cyprus on Dec. 16.

A communique from the Holy See Press Office said the migrants, who hail from the Democratic Republic of Congo, Cameroon, Somalia and Syria, will be supported directly by Francis. The international Community of Sant'Egidio will be responsible for their integration program, which will take a year.

During their meeting at the Apostolic Palace on Friday morning, Francis listened to their individual stories, with one Congolese boy telling the pope "you saved us!," according to the Vatican statement.

Among the new arrivals, some are noted to be doctors and computer technicians.

In honor of Francis' birthday, the refugees presented the pope with a painting by an Afghan refugee depicting an attempted migrant crossing of the Mediterranean Sea.

During a return visit to the Greek-isle of Lesbos earlier this month, Francis paid tribute to the many migrants who have lost their lives on the Mediterranean Sea seeking relocation in Europe.

"Let us stop this shipwreck of civilization," said Francis in Lesbos, which has long been a migrant hotspot.

"The Mediterranean, which for millennia has brought different peoples and distant lands together, is now becoming a grim cemetery without tombstones," he lamented. "This great basin of water, the cradle of so many civilizations, now looks like a mirror of death."

Migration, which has been a central theme of his eight year papacy, was a key focus of his Dec. 2-6 trip to the Mediterranean countries of Cyprus and Greece. Another group of new refugee arrivals from Cyprus is slated to arrive in Italy in early 2022 as a part of arrangement made prior to the pope's travels to Cyprus.

The pope's meeting with refugees on his birthday marked a continuation of past tradition of Francis choosing to spend the day with groups often on the margins of society. On his 80th birthday, in 2016, the pope shared breakfast with homeless individuals in Rome.

Francis, who was born in Buenos Aires, Argentina on Dec. 17, 1936, as Jorge Mario Bergoglio, has been a priest for 52 years. He has been a Catholic bishop for 29 years, serving the last eight as bishop of Rome.

Pope: Imitate God by being merciful to others