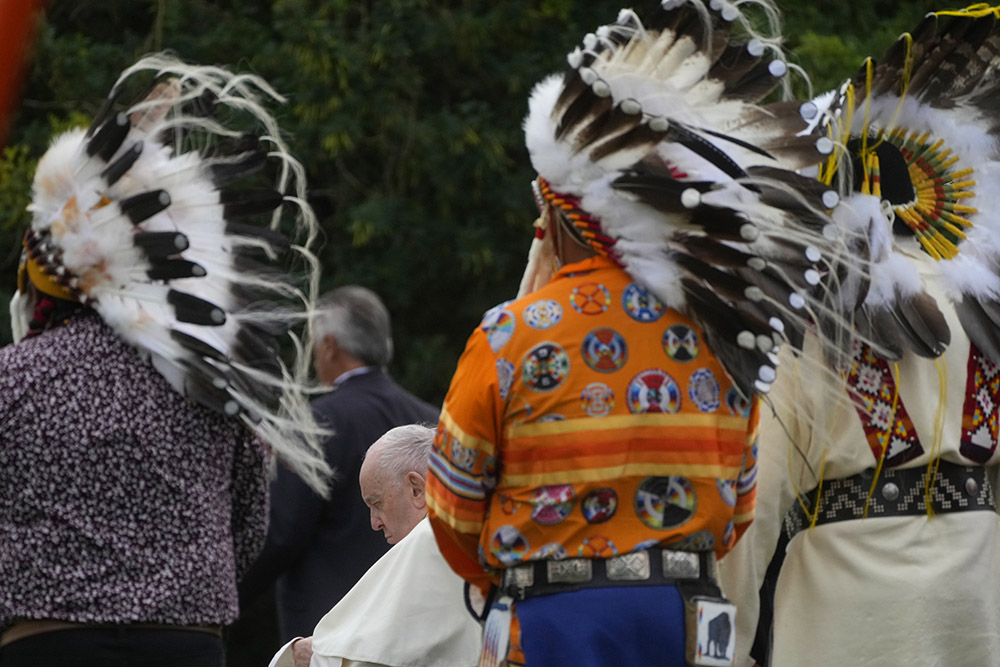 Pope Francis prays with Indigenous people in a cemetery at the former residential school in Maskwacis, near Edmonton, Canada, July 25. (AP/Gregorio Borgia)

Is there anything so rare in our modern, technocratic, power-obsessed world as genuine contrition?

How many times do public figures apologize "if anyone was offended" by some grievous wrong, as if what is wrong is contingent upon negative consequences? It is a non-apology apology.

How often do people mouth slogans about the sins of the past, asking forgiveness for the wrongs committed by others and making an idol of guilt? The historian of the Holocaust, Eva Fleischner, recognized the danger of such attitudes when she wrote: "Guilt which remains guilt is dangerous. It will become too heavy a burden sooner or later, and may in the end result in blaming the victim. ... We must help our students transform their sense of guilt into a sense of responsibility, for the present and the future."

How often do we moderns — having reduced our religion to a form of moral excellence, of either sexual purity or social justice — forget the ways iniquity reaches into every human heart? How often do we, in our zeal to be hypersensitive, unwittingly make our own the characterization of modern liberal belief penned by H. Richard Niebuhr: "A God without wrath brought men without sin into a Kingdom without judgment through the ministrations of a Christ without a Cross"? Not much need for contrition in that belief system.

Pope Francis is not afraid of genuine contrition. He is not amazed to learn that good people — and certainly many of the religious sisters who ran the boarding schools for the Native peoples were good people — did terrible and sinful things. He is not amazed to learn that previous generations of Christians invoked the name of the incarnate Son of God, in whom there is neither Greek nor Jew, while effectively destroying the culture of the Indigenous peoples, and failed to see the contradiction.

Pope Francis is not afraid of genuine contrition. He is not amazed to learn that good people did terrible and sinful things.

My colleague at Global Sisters Report Dan Stockman reported a wonderful article about the ways several religious orders of women are grappling with the history of their orders in the commission of what we now see clearly were cultural crimes of the highest order.

Francis sees that a healthy awareness of human depravity is a condition for genuine contrition, and that such awareness does not lead to despair, nor need it cheapen grace. It yields instead a clarity about, and a deep sympathy with, the human condition.

It is why, during his visit to the Jesuit curia in Rome earlier this month, when asked about his forthcoming trip to Canada, he said, "It is a trip that they say is not easy. I think it is." It is not easy because the sins were committed by others and long ago. It is easy because the pope understands evil and grace, the work of the devil and the redeeming work of the Lord.

The pope began his pilgrimage to Canada with a meeting with the Indigenous peoples. To be precise, he started with their dead. In his wheelchair, Francis was brought into a cemetery and there bowed his head in prayer. The image was powerful: the pope humbled by physical frailty, the Indigenous peoples praying with him, the wind blowing wither it goes (cf John 3:8).

Then the pope was brought in to an arena where the Native peoples organized a service quite unlike any I had ever seen: at the same time solemn and relaxed, unscripted and evocative, ritualistic and spontaneous. The pope looked thoroughly at home and at ease, although a bit tired from his travels.

When it came time to speak, the Holy Father did not just ask for forgiveness, nor simply offer an apology. The pope begged for forgiveness and displayed acute contrition.

"I have been waiting to come here and be with you! Here, from this place associated with painful memories, I would like to begin what I consider a pilgrimage, a penitential pilgrimage," the Holy Father began. "I have come to your native lands to tell you in person of my sorrow, to implore God's forgiveness, healing and reconciliation, to express my closeness and to pray with you and for you."

And later: "The place where we are gathered renews within me the deep sense of pain and remorse that I have felt in these past months. I think back on the tragic situations that so many of you, your families and your communities have known; of what you shared with me about the suffering you endured in the residential schools. These are traumas that are in some way reawakened whenever the subject comes up; I realize too that our meeting today can bring back old memories and hurts, and that many of you may feel uncomfortable even as I speak."

And, again: "I am here because the first step of my penitential pilgrimage among you is that of again asking forgiveness, of telling you once more that I am deeply sorry. Sorry for the ways in which, regrettably, many Christians supported the colonizing mentality of the powers that oppressed the Indigenous peoples. I am sorry. I ask forgiveness, in particular, for the ways in which many members of the church and of religious communities cooperated, not least through their indifference, in projects of cultural destruction and forced assimilation promoted by the governments of that time, which culminated in the system of residential schools."

And, again: "Here, today, I am with you to recall the past, to grieve with you, to bow our heads together in silence and to pray before the graves. Let us allow these moments of silence to help us interiorize our pain. Silence. And prayer. In the face of evil, we pray to the Lord of goodness; in the face of death, we pray to the God of life."

The meetings Pope Francis had with Indigenous leaders at the Vatican earlier this year left a mark, a mark that compelled him to go to Canada.

These are the words of someone who has heard the cry of the poor, someone for whom the plaintive lines of Psalm 34 resonate persistently, irrevocably, overpoweringly: "The righteous cry out, the Lord hears and he rescues them from all their afflictions / The Lord is close to the brokenhearted and saves those whose spirit is crushed."

Later in the day, at the Sacred Heart Catholic Church of the First Peoples, sitting in his wheelchair, the pope greeted members of the parish. Watching their faces as they approached him and as they departed, I was reminded of something Msgr. Lorenzo Albacete once said about Pope John Paul II — that there was a "human density" to the man that was quite unlike anything he had experienced before.

Francis has that attribute too. Nothing in his personality betrays even a hint of glibness.

It is remarkable that the pope is making this trip. He could have so easily, and justifiably, said he was unable to travel because of his knee. The meetings he had with Indigenous leaders at the Vatican earlier this year left a mark, a mark that compelled him to go to Canada.

This story appears in the Pope Francis in Canada feature series. View the full series.
A version of this story appeared in the Aug 19-Sept 1, 2022 print issue under the headline: Pope's apology to Indigenous peoples was truly remarkable.